Home Blog ‘Black Friday’ for Home Buying Is Near

‘Black Friday’ for Home Buying Is Near

The week of Sept. 22, which marks the beginning of fall, is the best time of year to buy a home, according to a new realtor.com® analysis. Buyers tend to find less competition, more inventory, and the biggest reductions on list price during that week, according to the study, which evaluated housing data in 53 metros from 2016 to 2018.

During the first week of fall, buyers tend to face 26% less competition from other buyers, and they are likely to see 6.1% more homes available on the market compared to other weeks of the year, according to the analysis. Nearly 6% of homes on the market will also see price reductions, averaging 2.4% less than their peak. “As summer winds down and kids return to school, many families hit pause on their home search and wait until the next season to start again,” says realtor.com® Senior Economist George Ratiu. “As seasonal inventory builds up and restores itself to more buyer-friendly levels, fall buyers will be in a better position to take advantage of today’s low mortgage rates and increased purchasing power.”

The West may be the region to see the most noticeable differences in housing markets the week of Sept. 22. During this time frame in the past, the region has experienced nearly 30% less buyer competition, about 4% reduction in list prices compared to peaks, and nearly 9% of homes slashing their prices, according to realtor.com®. Plus, 22% more active listings will be available to buyers.

On the metro level, Denver may see the most price cuts during the week if the market follows past patterns. Historically, 11 percent of listings in the Denver area have their prices reduced during the week, followed by Salt Lake City (10.8%); Seattle (10.2%); Austin, Texas (9.9%); and Portland, Ore. (9.9%). 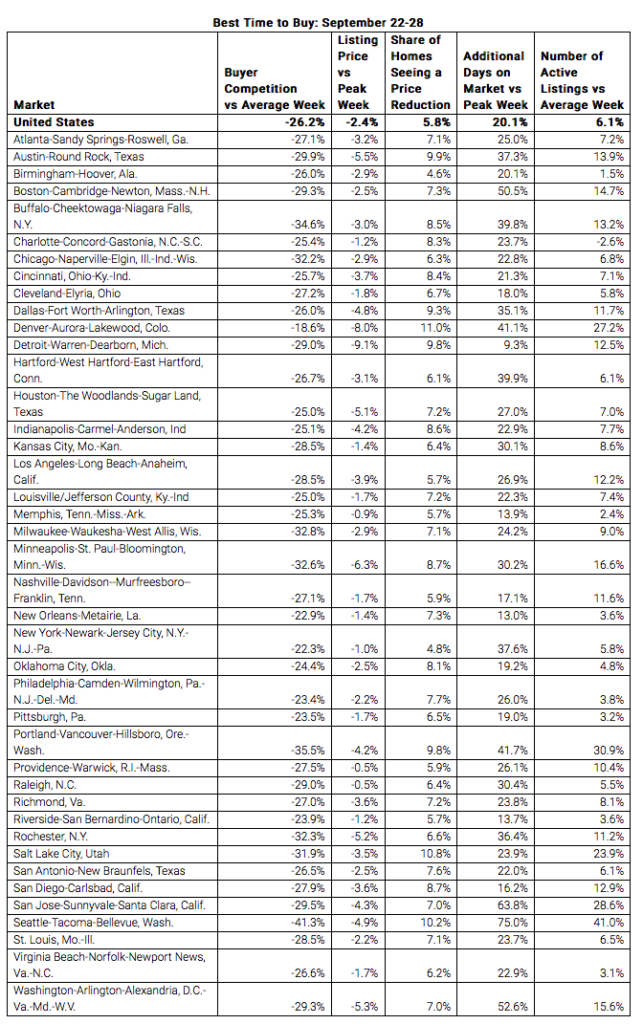