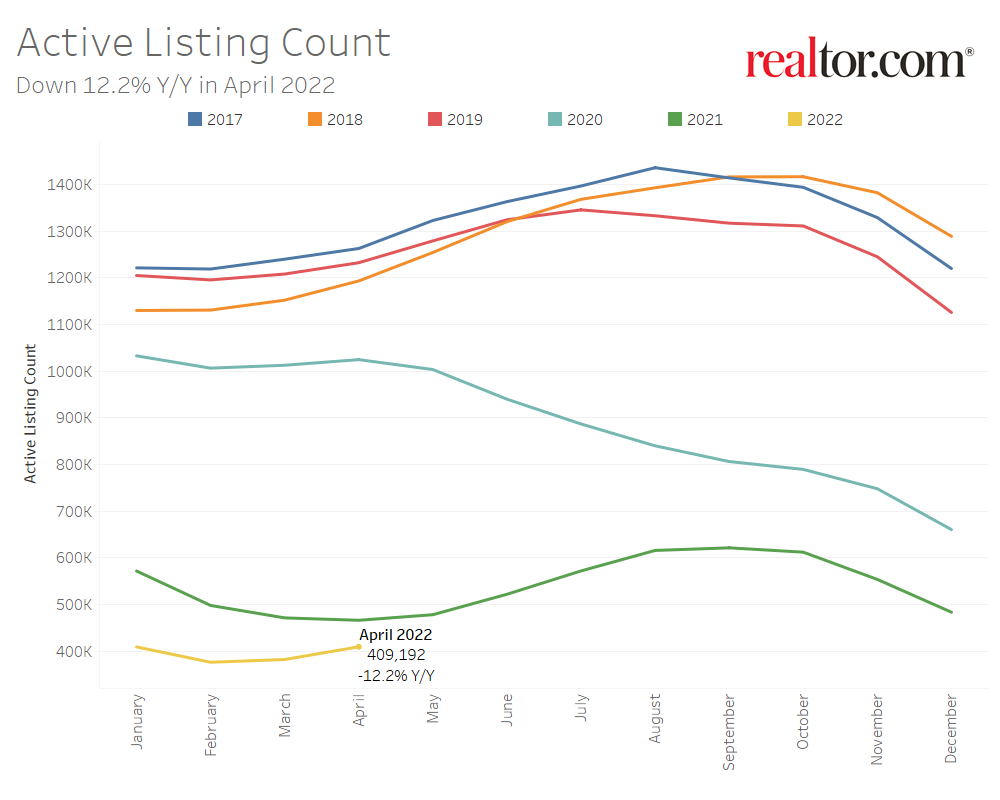 Realtor.com®’s April housing data release reveals that housing demand has continued to moderate while buyers contend with both rising home prices and rising mortgage rates. In April, the median home list price grew to a new all-time high while the number of listings in pending status–those that are in the process of being sold– declined. Sellers have also re-emerged and newly listed homes have finally increased compared to the same time last year. With inventory also projected to grow compared to last year in the coming weeks, buyers who are able to stay in the market this year may face less competition and more choice this homebuying season.

Inventory on Track to See Growth in the Coming Weeks

In April, newly listed homes were close to matching last year’s levels and only declined by 0.9% compared to the previous year. However, sellers were still listing at rates 13.0% lower than typical of 2017 to 2019 April levels. Nonetheless, while last month the moderation in active inventory was not a supply-driven improvement, this month, home sellers are playing a role. Sellers listed more homes than last year in 4 of the 5 weeks ending in April.

In addition to an increase in new listings, buyer demand has moderated due to the combination of rising interest rates and all-time high listing prices that have in

creased the cost of financing 80% of the typical home listing by almost 50% compared to a year ago. The number of pending listings on a typical day (listings that are at various stages of the selling process that are not yet sold), has declined by 9.5% compared to last April, indicating that a moderation in demand is also softening the rate of turnover in inventory. For homebuyers who are still actively searching for a home, lower competition and more seller activity will provide some relief.

The inventory of homes actively for sale in the 50 largest U.S. metros overall decreased by 10.3% over last year in April, an improvement in the rate of decline compared to last month’s 16.0% decrease. Regionally, the inventory of homes in large Northeastern metros were showing the largest year-over-year decline (-13.4%) followed by the South (-10.4%), Midwest (-7.5%), and West (-5.7%).

Homes Spend Less Time on the Market Than Last Year, but the Gap Is Shrinking

The median national home price for active listings grew to a new all-time high of $425,000 in April. This represents an annual growth rate of 14.2%, an acceleration from last month’s growth rate of 13.5%. While high, this price growth may be lower than what individual shoppers are seeing because medians can reflect changes in the mix of what’s for sale, and today’s median reflects a larger share of smaller listings than was available one year ago. The median listing price per square foot, which is one approach to control for this change, increased by a slightly higher rate of 15.1% year-over-year in April. The median listing price for a typical 2,000 square-foot single family home, which is another metric that somewhat controls for this change, rose 17.3% compared to last year.

However, sellers are responding to a softening of demand. The share of homes having their price reduced increased from 5.6% last April to 6.9% this year, but still remains 9 percentage points below typical 2017 to 2019 levels. Forty of the largest 50 metros saw an increasing share of price reductions in April, up from 25 last month.