The uptick in urban home searches closely trails a 235% increase in searches for homes in rural areas. Home prices were up by double digits in both neighborhood types, reflecting both continued interest in rural life and optimism about the return of city life as the pandemic persists.

Meanwhile, pageviews of homes in large metro areas–which includes cities and their surrounding suburbs–rose 200% year over year in October, the biggest annual increase this year and a mark of renewed interest in urban places since it stagnated in March and April when the coronavirus pandemic hit. Pageviews of homes in large metro areas, rural areas and small towns are converging toward similar year-over-year increases as Redfin.com searches in rural areas and small towns start to settle and cities pick up steam. 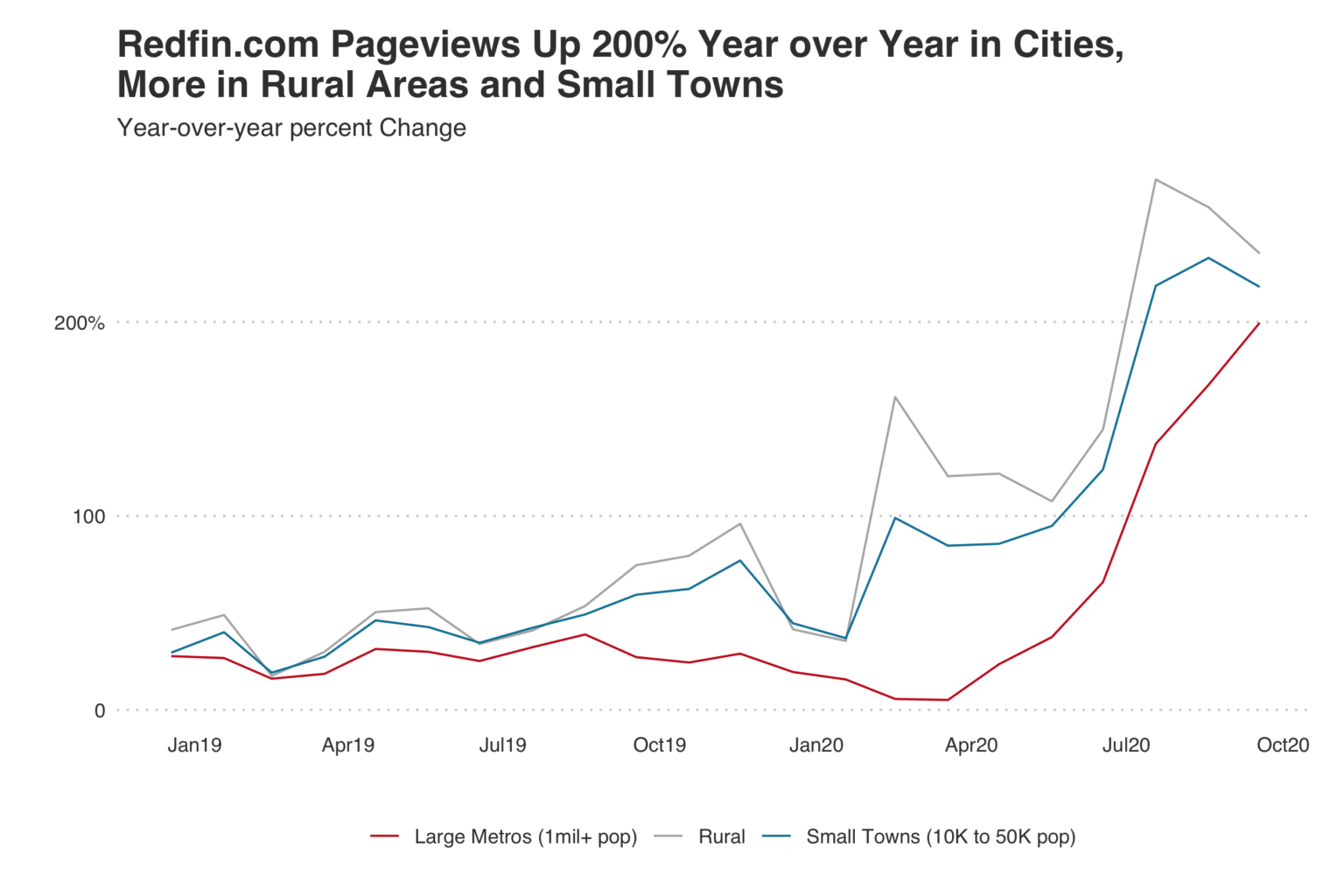 “Rural areas and small towns remain desirable—especially for families who need space to accommodate remote work as the pandemic persists—but record-low mortgage rates are motivating people to search in cities, too,” said Redfin chief economist Daryl Fairweather. “Many buyers are crossing their fingers that restaurants, bars and shops may be bustling again in the next year or so, and they’re looking to invest in the eventual resurgence of cities.”

The housing market data in this report divides rural, suburban and urban based on categories from the U.S. Department of Housing and Urban Development, which built a model to describe neighborhood types based on responses to the 2017 American Housing Survey. Note that the categories in this section are different from the categories in the section on Redfin.com pageviews, which divides areas into large metro areas, small towns and rural areas.

The remote work and homeschooling that have come with the pandemic led to a surge in interest in less densely populated areas over the summer, with demand for rural and suburban areas outpacing demand for urban areas. Though the housing market is still hottest in rural neighborhoods, urban areas are making a comeback.

“While life in the city has changed during the pandemic, with empty sidewalks and boarded-up storefronts becoming the norm, some buyers are looking long-term and realizing it’s possible to buy a condo for a 2017 price without competition,” said Jessie Culbert Boucher, a Redfin real estate agent in Seattle. “If they hold onto it for five years, they’ll likely ride out the current downturn, make money and enjoy the return of vibrant city life.” Pending sales, a more current housing market indicator, jumped significantly in all three neighborhood types in October. Pending sales were up 37.4% year over year in rural areas in the four weeks ending November 8, and they were up 36% and 26.1% in suburban areas and urban areas, respectively.